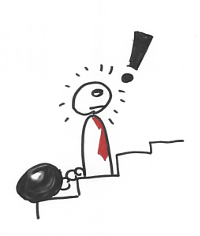 Are modern organizations ready to pay the price for increased demand for their leaders? Countless companies and organizations are currently changing how they work internally. Some experience a growth spurt in the wake of digitalization, others want to be more flexible in reacting to change. And a lot of these organizations struggle with these transformations. They got the agile framework of their choosing in place, they got the teams set up and maybe they even streamlined their portfolio and technological infrastructure. At first, everything looks good, but after a while, all the shiny new things start to lose their gleam and things become tedious again. Decisions take ages to be put into action and once a course is set, people find it hard to deviate from it. All the fluffy stuff like empowerment of the teams and people somehow does not seem to happen. These symptoms might hint that an organization is suffering from “leadership debt”.

When companies change, people often find themselves in new places inside an organization. Be it the former senior engineer suddenly finding himself in a role as a team leader or the former project manager being now responsible for large-level process execution instead of fighting tight budgeting wars. Or even the CEO sees herself no longer as the top commander, but as a facilitator for enabling people to put the company vision into a strategy. Whatever the shift is, some people will find themselves in a position that demands different leadership behavior than before. If, as a consequence of the new situation, leadership behavior is not adjusted, leadership debt will occur and the performance of an organization will erode over time.

We cannot solve our problems with the same thinking we used when we created them.
-Albert Einstein

Leadership debt - what is it

In software engineering, there is the concept of technical debt. Essentially it means that parts of existing code have to be rewritten at a later stage to ensure continuing product quality. Typically either because of rising product complexity, changing operational circumstances, or because of deteriorating structure in the program architecture. The code might have been OK when it was written, but as the context evolved, further development of the program becomes harder and harder. If such debt is accepted consciously and the interest is regularly paid, in the form of maintaining and modernizing the code-base, that is not that much of a problem. The problems start if the engineers are not aware that they entered such a debt. Then the interest on the debt silently amasses until one day - when that part of a program has to be changed - payday arrives. This is usually very expensive and disrupting to the daily business as the cost have to be paid all at once including the amassed interest.

The same concept can be applied to leadership. Past behavior can become inadequate because of changing circumstances or rising complexity in an organization. As a consequence, the existing decisions and policies suddenly no longer fit the current situation. It may even be that the way decisions are made is no longer adequate. As in software development, if the leaders are aware of this and can change their behavior and adapt their policies and decisions, not much of a problem. Danger looms if the interest amasses silently and payday arrives suddenly. A high turnover of people or whole teams quitting suddenly all at once are often signs of failure to pay off leadership debt in time. companies failing to put even the simplest decisions into action is another strong indicator of a high leadership debt. Payday might not arrive with a big bang, but the interest might just grow big enough that all energy goes into holding the status quo without moving forward. In the end, the effects of leadership debt take many different forms, which make it so hard to recognize. 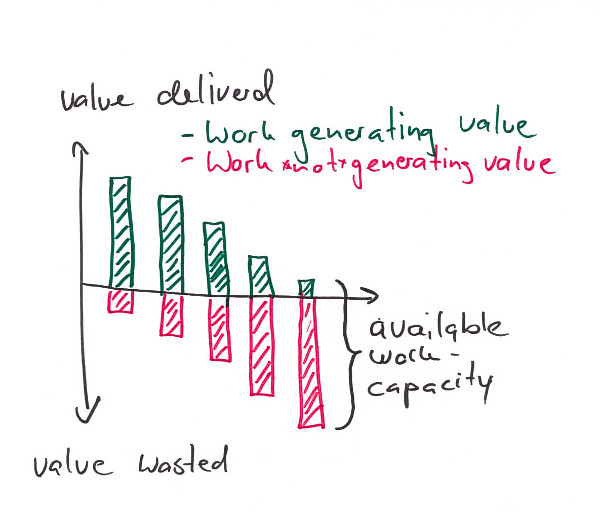 Value generated by work degrades if debt is not paid

It is almost impossible to avoid such debt completely, especially in a rapidly evolving environment. What yesterday worked might be obsolete today. The way people were led a few years ago might look antiquated by now. What is needed are structures and processes that make this debt visible as soon as possible and then allow the people to tackle this. In software engineering, we call these processes, skills, and structures “DevOps”1. For addressing leadership debt, there exists no similarly catching term.

Competent leaders are necessary for complex organizations and even more so if that organization is transforming itself. As changing the organizational DNA forces a company to internally realign itself, someone has to take over the lead in figuring out the direction to go. Naturally, people are looking for leaders to drive such change. Often there is a distinct leader for a certain situation, but it is not necessarily always the same person for each situation. In an unstructured social setting, leaders emerge spontaneously through conversation and behavior, in a company, people are typically attributed to roles that foster expectations on who is leading. Assuming that just because a person is fulfilling a certain role he or she is automatically good at leading - or even aware of the implied leadership - is a common trap that organizations find themselves in.

Bad leadership has many consequences and comes in many forms. Be it the inability to make meaningful decisions in time, the inability to motivate people to work in the same direction, or even people frequently leaving the organization in frustration. All bad leadership leads to an erosion of the performance of an organization as a whole until it no longer functions as intended. This is leadership debt. As with technical debt, it is usually not one big event leading to that state, but many small mistakes and wrong assumptions in leadership that accumulate.

Minimizing the amount of debt incurred is doable, avoiding it completely is almost impossible. As a consequence, the focus is not primarily on avoiding leadership debt upfront, but rather on being able to pay back the interest as quickly as possible. As in software engineering, training people and encouraging constant learning is a very good start.

Leading people is not something that can be learned within a two-day “Leadership 101” course - unfortunately, this seems to be exactly what is assumed when looking at a lot of companies. Few people can perform a leadership function naturally, for most of us learning how to lead entails a very steep learning curve, lots of hands-on experience, and the occasional failure. Formal training in leadership principles and methods helps, but most strong leaders acquire their competence by learning by doing and by constant and active reflection about their impact. Good leaders are not only reflecting on themselves but are keen on receiving honest and critical feedback from others. Unfortunately, lots of organizations lack the practice to apply such feedback to their leaders and are further hampered by structures that make giving feedback harder. Consciously creating structures and mechanisms that foster constant feedback and learning are among the most important things for avoiding leadership debt in an organization. Starting to build a culture where people give and receive constructive but critical feedback daily and leaders are easily accessible is, therefore, a must. Getting honest feedback is beneficial for everyone, but for leaders to be in a good feedback loop is worth even more, as they are key figures in making any organization tick. 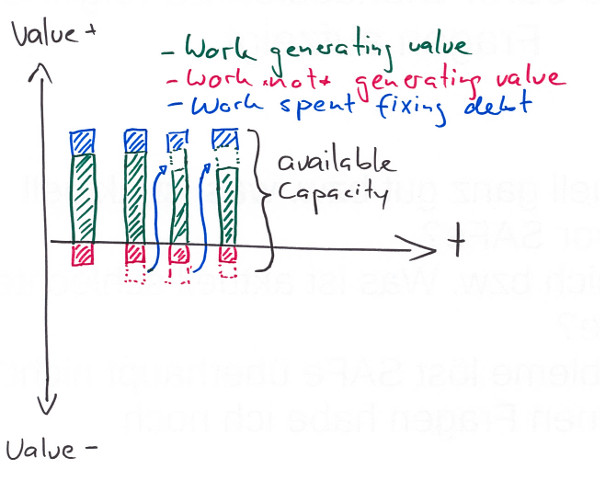 Value generated by work degrades if debt is not paid

The first step to reducing leadership debt is creating time for people to think and contemplate their actions. If people are under constant time pressure, the necessary learning circles will not take hold. Learning experiences will be ignored or brushed away with the intention of “looking into it later”. We all know that most often “later” quickly becomes “never” when you are busy. A simple way to reduce time pressure is not to plan meetings back to back, but to take a breather in between. Having a few minutes or a quarter of an hour of breathing space is often already good enough to allow people - especially those expected to lead - to collect their thoughts. Even better than those few minutes of thinking-time, is to encourage people to occasionally spend an hour somewhere quiet. Preferably with just a pen and piece of paper (No emails, no Slack, no phone) to think and take notes.

Actively looking out for and recognizing leaders is another crucial part and an often overlooked missing piece of the puzzle - especially in organizations that are actively transforming themselves. People often associate leadership with a certain role or management function, but to find true leaders one has to look beyond such roles and titles. When observing how people work together and interact daily ones can often find inherent leadership skills in unexpected places. The big benefit of these “hidden gems” is that they often evolved naturally through unstructured social interaction and thus usually have a very broad acceptance by their peers. Encouraging these naturally grown leaders to actively exert their leadership skills helps to mitigate the leadership debt in a short time. Making them role models or even mentors for leadership can bring a long-term benefit as well.

Identifying good leaders and giving them thinking time enables them to mentor and coach others inside the organization. The high-performing leaders should do daily hands-on coaching and mentoring of other leaders and generally of other people. This might come at the price of sacrificing short term gains but distribution of knowledge and good practices is essential for the sustainability of an organization beyond the individual careers of its key figures. It is of course not just the mentors who need time, also those on the receiving end of the mentoring need time to listen and learn. External coaches can be a great help, but they carry the risk one becomes too dependent on external people to combat leadership-debt.

Building and distributing leadership skills need strong feedback culture. Growing a culture of open feedback needs time, but a good first step is to train people in how to give and receive feedback. People being actively aware that feedback is different from criticism or scolding is often the first sign of an emerging feedback culture. Encourage people to give feedback regularly, not just when something goes bad, but also when things are coming along well.

Building successful leadership by making time, enabling feedback, and finding the right people is hard and complex work, but the rewards are huge. Recognizing that one might suffer from leadership debt is often the first step toward getting rid of it. As with technical debt, leadership debt will never be completely avoidable but if it is being acknowledged and the interest is paid upfront, later costs can be greatly reduced. As each organization has its context there is of course no “guaranteed to work”-recipe to minimize leadership debt, but the measures described above are often a very good starting point.