Five and a half steps to efficient meetings 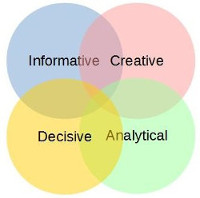 Meetings are boring, overcrowded, take up much of your valuable time and don’t produce the desired results. Or they can be interactive, efficient, goal-driven, interesting and sometimes even fun. So how to go about planning and running successful meetings? Five and a half Steps to successful meetings

Running successful meetings is not difficult; it just needs some preparation and a bit of practice. Before I go into the details on how to plan and run an efficient huddle I would like to state two very important point: If you call in a meeting, you are the one responsible to get the most out of it. It’s your show, so while you might not be the main contributor to the content be sure you are the one to drive the meeting forward. Be the facilitator of discussions, be the one to help everybody to keep the focus and last but not least be the eye that watches the clock. As Slayemin put it so aptly in the comments below: “The ultimate purpose of a meeting is to reduce confusion and uncertainty. If people go into a meeting and they leave less confused or uncertain, then it was a good meeting. If people go into a meeting and come out with the same or greater amounts of confusionion, it was a poor meeting. As a meeting attendee, you are either the one who is confused and uncertain, or the one dispelling confusion for others.”

Step 1: Send out the agenda before the meeting

When you schedule a meeting prepare an agenda and send it to anybody involved. Preferably early enough so anybody can read through it and comment on the agenda if necessary. Tell everybody what this meeting will be about and what its goals are. This helps you also to keep the meeting on topic later on, as it prevents people from shoving in an extra discussion about something else. Having a clear agenda also helps to decide who needs to be in the meeting and who will waste his time as an over-passive listener.

Step 2: Have a well structured agenda

Try to keep the agenda short and on topic, as this also helps to limit the scope of the meeting, which in turn helps people to sty focused. I structure almost all my meetings very similarly like this (Although often in a paraphrased way):

Step 3: Stop the babble and focus on the topic

Time is money, so you don’t want to waste it talking about irrelevant stuff. Often enough there are meetings where two people start to discuss something in a very detailed manner while five people sit there bored staring at the walls because nobody wants to interrupt. The solution is to create an environment where it’s ok to stop runaway discussions. I sometimes distribute red cards at the beginning of the meeting and tell people that if they are thinking that a discussion doesn’t contribute to the meeting they can raise that card. The people talking should then finish their sentence, write down the topic of the discussion and postpone it. In groups where I have done this regularly we now can do this easily without the red cards, because everybody knows that it’s ok to tell the others to shut up for now.

Try not to call in meetings longer than two hours and if you have to, plan in frequent short breaks. People cannot stay concentrated for longer than one hour without a quick breather.

Be dependable when it comes to timing and duration of meetings. Be on time when starting a meeting, better yet be five minutes early and have everything setup and ready. Having ten people watch somebody fiddle around with a projector for five minutes is not funny. Have your handouts, Flip-charts, presentation and any office supplies needed such as post-its, markers and writing pads ready at the beginning so you don’t have to run off to find them in the meeting.

Ending the meeting on time is the harder part but with a bit of training this becomes easy as well. Start out by time boxing the items on the agenda, and have an eye on the clock during the meeting. Often it’s better to conclude a meeting on time, even if you have not reached all the discussion points on the agenda, take a breather and schedule the next meeting at a close time in the future. Estimating how much time something takes is hard at first and needs a bit of training but a good guideline is to do a quick calculation along the line: “five people are in the meeting, everybody will talk 5 minutes about the subject, so 25 minutes it is.”

This one is simple. Take notes, sort them after the meeting and archive them in a place where you can find them again. Distribute the notes to the people involved between meetings, so you don’t need to raise the same issues over and over. Also encourage others to take (& share) their personal notes.

Running meetings takes training and training needs feedback. Get feedback on how the meeting went from the participants. One quick way to get feedback is to prepare a flipchart with a pre-drawn graph on time invested vs. outcome and have everybody leave a tick-mark on the graph. Follow up with the people who think they wasted the time, ask them why. Also give others feedback when they run a meeting to encourage them to do the same.

Using this on different kinds of meetings

Meetings can span a very large range from all-out creative brainstorming sessions to the dry presentation of your new company regulation on home-office work. While the five steps fit any kind of meetings, they can be tailored a bit to fit any particular style of meetings.

I tend to place my meetings into four overlapping categories to get a first grip on how I want to run a meeting and what to expect as outcome. The boundaries between the categories are fluid but knowing in which area I am usually helps me in setting up the agenda and time frame of a meeting. 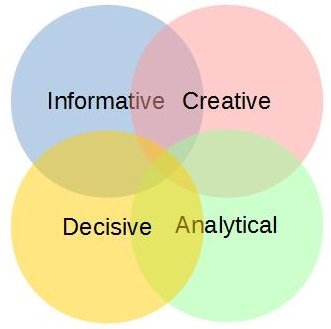 Informative: The purpose is to fill in the attendees with certain kind information, frontal presentation is often the way to go, but restrain yourself from droning away. Keeping your audience’s attention up is one of the key challenges. Having a clear and focused agenda that helps people follow up the progress of the meeting and stopping any unnecessary babble helps to avoid losing the audience. Your job as the facilitator of the meeting is to get the facts across in a concise manner and answer any questions from your audience to their satisfaction.

Creative: Usually the most interactive kind of meeting. You try to find out something new, whether an artsy brainstorming session or a technical design meeting usually you get the crowd to participate. Challenges are to restrain run-away discussions and actually find a conclusion while not restraining the people from getting new ideas in. As the runner of the meeting you are responsible that your creative process runs smoothly and ensure and document the progress of any discussions and ideas.

Decisive: You got the facts laid out but you need to find a decision on something where the facts are already laid out but might be conflicting or not yet fully understood. Often combined with the informative meeting, the challenge here is to actually get a decision to made and responsibilities cleared. To keep these kinds of meetings short having a pre-read where everybody can get up to date in his or her own time helps shorten these meetings. Time boxing these meetings helps to avoid running a discussion in circles, sometimes one has to agree to disagree but still decide for one option.

Analytical: You got a problem here but we don’t know what (or who) caused it, so you call in the gang and to figure out the why. Collecting and consolidating any information on the problem before the meeting will speed up the actual process of analyzing the facts. Have an eye on conflicting information, check for any inconsistencies and bring them to the attention of the attendees. You might not be the one person with the deepest insights into the problem but your job here is to mediate between multiple different opinions on the state of affairs. Especially when the question borders on the “who caused it” avoiding slipping into a blame-frame is often a key. Analytical meetings are often followed or interwoven with creative or decisive meetings so be sure to track and document the meeting for further use.

The five (and a half) steps and the four flavors of meetings are tools for you to use, but said that as with everything it’s practice and not the tools that make perfect work. To run meetings smoothly and confidently you will need some interpersonal and crowd control skills which will come with practice and time. Use the five steps as an anchor point for planning and running meetings, decorate them with your personal style and preferences and your meetings will never be boring again but efficient, goal oriented and successful.

(this article was originally published on gamedev.net)