Do not leave your innovation to the engineers 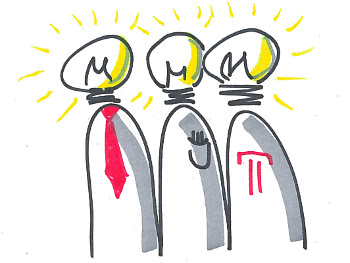 We need to be innovative! - I heard this statement or a variation of it a few times over my past in working as a software engineer. We engineers love this, as we get more time to tinker with anything we find interesting - Which is a lot. The result are often better tools or tool-chains to make our life as developers easier, but very rarely the output of such initiatives improves something tangible for the users of the product we are working on. Why? Because on these innovation days we are usually stuck together with other engineers which means that we mainly discuss engineering problems.

Whats often missing to the these “innovation”-starters is the business end of a product. This is often deeply rooted in company culture, as “technical excellence” is often confused with “innovation”. Companies often like to present themselves as “We are an innovative company, because we use very modern software”. While this is appeals to me as a software developer, I don’t think that just using bleeding edge technology makes you an innovative company. It might make a quality product - a good thing, but not necessarily innovative. In my experience it is very rare that an elegant engineering solution led to a new feature on a product just by itself. Start-up companies often get founded on such a technical spark, but more mature companies seem to have difficulties in harnessing these possibilities. As a result most of the time the output of such engineering-driven “innovation” is the same product, just better engineered. This dynamic is understandable, as more mature companies often are very good at what they are currently doing and any new product is probably in its first iteration not as refined as what people in and around these companies are used to. But that is ok, as “not as good” does not mean “bad” at all.

What is needed is a bit of courage and the willingness to throw the right people on it to make true innovation happen. Any functioning company probably has all the people that are needed to facilitate true innovation. The most importatnt step there is to combine what I like to call “business innovation” and “technical innovation” by using the cross-functionality teams. Include the product owner, business analists and other business oriented people in the innovation process. Change the question for innovating to “What could be the next product our customer wants?”. And only once you have a rough answer to that question have the engineers figure out the feasibility by doing early mocks and spikes. One can also apply some techniques from software development to this innovation process. Methods such as pair- or mob-developing an idea work very well in my experience. Taking an afternoon off to create a show-and-tell for new products often produces a lot of valuable ideas in a short time. Such methods are available in abundance and there are a lot of books describing these. Some of my favorites are Thinkertoys and Gamestorming.

But just finding the ideas is not enough the teams finding them have to be given the power to make them happen as well. This is something I have seen failing a few times as well, because the ideas got handed over to either just the engineers or just the “business people”, neither fully empowered - and willing - to make a product go in all it’s aspect. A pitfall at that point is to avoid to just drop any innovation in favor of the next new shiny thing as this is often a point where it can get a bit tedious to keep at it. That is why it is good to have all the necessary people on board, as this makes it much more likely that someone will champion an idea and keep the team going until it becomes a real product to develop.

Team setup is unfortunately not all that is needed to get innovation going, but it is a good start. From there on key factors to working creatively together can grow. It will take a bit of time for a new formed team to find a good, open communication and also to find a method how to facilitate innovation. Also this process might need patience, some resiliience to keep at it and sometimes a thick skin when things do not go as expected. But after all it is worht it, because any company that does not make itself obsolete will be made obsolete by someone else.